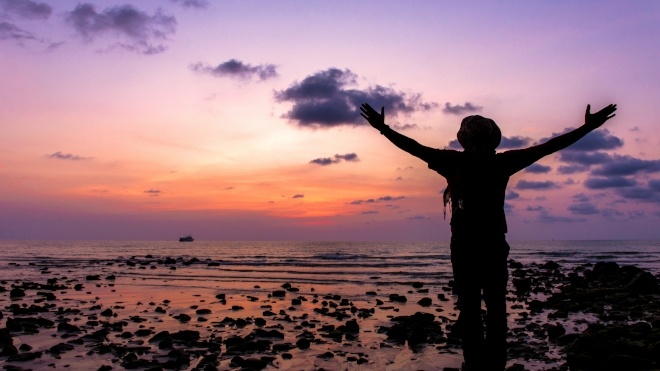 Churches of all different sizes, denominations, and locations can be found online. As our world gets smaller and smaller, we can find inspiration from every corner of the world. We were recently inspired by a Facebook post from a church account. It was a "friend of a friend" kind of thing and we knew we had to share the story with all of you!

After hearing her story, it became clear that many churches can try some of the same ideas, too.

We recently talked to Whitney Kiger, Trinity Episcopal Church's official Parish Secretary and unofficial website and online communications extraordinaire. She talked about a recent win in her personal and parish Facebook engagement goals. And it started with an unexpected thing: mayonnaise (No, really!).

How Her Role Has Grown 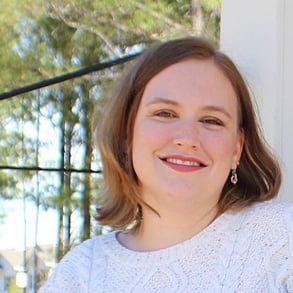 Whitney recently celebrated her official 10 year work anniversary, but her role in her church started several years ago. The beginning of her story can be pinned back to a small conversation she had with the church priest in early 2008, when she was telling him how Facebook was where the world was moving (and boy, has it!).

She was originally hired on as the Parish Secretary, but as the only person on staff with a Facebook account, as well as the most tech-savvy, she started the church's first Facebook page.

Over time, in addition to the Facebook page, she became the head honcho for the entire church website and communications.

"It's a conversation—not a billboard." - Katie Allred

Inspired by fellow church communicator Katie Allred, this became Whitney's mantra for the church's Facebook presence. As a small church, she continually strives to build the conversation and strengthen her church's community using Facebook pages and groups as her medium.

To help promote their annual church picnic, Whitney was reading one of her favorite magazines, Southern Living, and suddenly an idea just clicked.

"Our community is as southern as it gets—and we're all particular about our mayonnaise, this could be a cute way to tease ourselves and get some engagement on our Facebook page."

Thus, the poll was born: 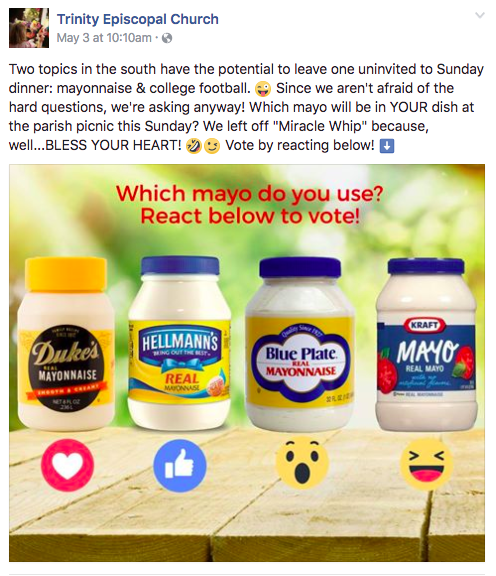 And we just love. it. It brings the community together to actively talk about a fun-yet-very-serious, highly debated topic in the south ;). And all the mayonnaise-enthusiasm "accidentally" helped to spread the word about their event.

Facebook increases your posts' reach when they see that more people are engaged and commenting on the post (It's not a coincidence that when your Facebook friends get engaged they land at the top of your newsfeed—it's math. Facebook think you want to see what your friends are also seeing.)

The Results and Final Words from Whitney

While their Facebook page has around 340 likes, the mayonnaise poll post got a reach of around 560, a couple shares, and is one of their most-commented-on messages!

For anyone who has ever been in the same position as Whitney—in a loving church family (no matter the size), and with no formal technology training—she wants to say one thing:

"Read all you can, and pay attention to other similar church pages in your area. The internet is full of ideas—I've aimlessly clicked on my phone at 1 am and found ideas. Use everything you can as inspiration to see where you might improve!"